In my brain, I'm still a youngster just trying to figure out what I'm going to do with myself, what my purpose in life is, and basically who & what I want to be when I grow up... The problem is I'm a grown woman now and I still haven't figured out the answers to any of the aforementioned questions I've posed to myself. 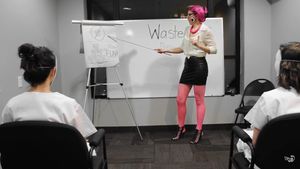 When I was 12, I wanted to be a teacher. That summer I decided to gather all of the unsuspecting neighborhood kids together to sit in a mock classroom in our basement, while I subjected the poor souls to my self-curated curriculum. I taught math, gave spelling tests, I was the coach during Physical Education, you name it... I would hand out homework, and the fools would actually take it home and do it! Those kids thought they were getting a break over summer vacation... not if you lived on my street! Eventually, I actually did get a job at an elementary school, working in their after school program, which is essentially a glorified daycare program. This, in turn, led to a job as a kindergarten teacher's assistant, which -next to my server job that I talked about in Entry # 35 was my favorite job ever. The things that come out of the toothless mouths of 5- & 6-year-olds has to rank up there as some of comedy's best material. I could arrive to work in the worst mood ever, but as soon as I stepped into that classroom and saw those precious little snotty faces, I couldn't help but smile. The lead teacher in the classroom turned out to be one of my most valuable mentors in life and I adore her and learned more from her than she'll probably ever know. She's also like the pied piper for kindergartners. Magical.

As a teenager, it was settled that I would be a famous singer by the time I was in my early 20's. Well folks, my 20's are long gone and I'm still not famous (except to a few) and that is a painful pill to swallow. The older I get, the more difficult it becomes to convince people to take me seriously as I leap around the stage like a gazelle in my hot pink wig, singing about teenage angst, and bragging about my robust constitution for alcohol consumption. The truth is, my body hurts after those shows... but not nearly as much as a hangover does now. I used to think I was invincible to the aftermath of a long night of partying. Now it takes 2 days in bed to get right again. It's reached the point where I rarely overindulge anymore because the repercussions simply aren't worth losing 48 valuable hours of life over. How's that for rock and roll? 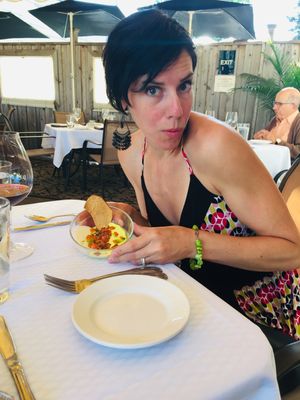 At one point I wanted to be a food writer. I saw myself traveling to the most charming cities of Europe, and while seated at a white-linen table, I would pragmatically sample escargot, sardines, truffle buttered meats, and fanciful desserts. Once sated, I would get out my pen and write about how the experience had either tickled or offended my senses and it would be published in some renowned culinary magazine for my adoring readers to consume & digest. They would send me fan letters telling me that they could almost taste the savory sauces I had so elaborately detailed. I still might do this, mind you, but first I need to find someone willing to pay me for it! I also entertained the idea of being a personal chef, so if any of you are in need of those services, please hit me up. I make a mean rack of lamb. 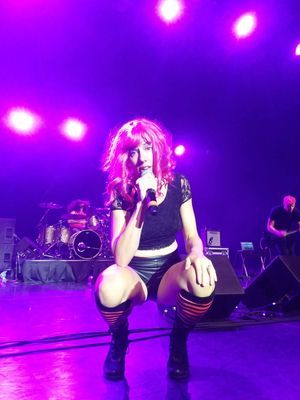 The bottom line is that being an old lady rocker isn't cool to me. I mean, of course Joan Jett, Lita Ford, and my goddess Cher all look & sound splendid- but they made a name for themselves when they were young. The way I see it is that because they earned their spot in rock & roll history during their youth, and earned respect in this fickle industry, they have license to continue on doing their thing until they start to sound like Johnny Cash and look like Betty White. Or until they get too senile to remember the words to their songs... whichever happens first. I don't get that same rite of passage because I never broke. There will come a time when I'll need to pass the mic to a younger diva and when that time comes, they better clear a spot for my wrinkled ass at a white-linen table in Positano, because I'll have my pen ready.