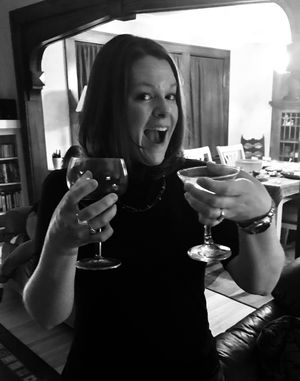 Our guest writer is an environmental and social justice activist, wine enthusiast, & chocolate lover!
She also happens to be our drummer's sister.

A guy I know is dying.

I realize this statement is applicable to everyone, because in a way, we’re all dying from the moment we’re born. But this is a story about someone who is living out the remaining moments of his life, and his partner who is bearing witness to his battle against cancer. Imminently. In a time when the world is being swallowed-up with people wishing their quarantined lives away, this is a reminder about how valuable small moments can be and how people who are seemingly unsuitable for friendship can become unexpected inhabitants within one’s circle of fondness.

This guy, let’s call him “Mugshot,” is cool and mischievous. I’m sure he’s done something illegal at one point or another, so it seems like a fitting nickname for him. He’s sort of quietly cantankerous and on the nihilistic side of the spectrum, whereas most people tend to describe me as generally optimistic, outgoing, hopeful, goofy, and dare I say, “bubbly.” His sense of humor is pretty crass and I’m not sure anything really offends him. He doesn’t have much tolerance for superficial pleasantries, but he will wander deep into the weeds with you if you’re willing to go there. Our mutual contact, who tried to keep us as far away from each other as possible for as long as possible, was right to think that we were likely to be incompatible in many ways... Little did she know that I’ve always had a soft spot for curmudgeons.

What’s even more remarkable about Mugshot is that his partner, we’ll call her “Kidman,” is really cool too. That’s hard to come by. Stop and think about the last time you met a pair of people in which both parties were equally cool in their own way. More often, you meet a cool person and then you meet their partner and if you’re lucky maybe they’re nice, but usually they’re weird or an asshole. Not these two. They also both really like each other. That’s an even more rare find. I don’t really know how it happened or why, but Mugshot and Kidman decided that I was worth their time. They welcomed me into some of the more intimate corners of their life. I got to hear stories about their adventures. I got to watch them showcase their super advanced dance moves, which became one of my favorite party tricks. As an adult who remembers being bullied in school, the wounds of social rejection may have scarred over but they never really go away. So, Mugshot and Kidman deciding that I deserved a chance was a big deal in my world. No pretense. No special test I had to pass. Just, “Hey! Come on in.”

During this unprecedented time in history, I have looked back on my friendship with Mugshot and Kidman as one of my anchors in the storm. Some of my favorite memories from the past 5 years have been moments that included them. His smile, her laugh, their respect and adoration for each other, and how they genuinely show up, not just in proximity, but in their very beings.

As we collectively continue to navigate a world of physical distancing, social connection has become our new currency. Be like Mugshot and Kidman. Create little moments of authentic connection. Include people who are seemingly incompatible. Make small gestures because you never know how big it might feel on the receiving end. Do it now because none of us really knows how much time we have left. As Kurt Vonnegut once said, “Enjoy the little things in life because one day, you’ll look back and realize they were the big things.”