I once dated a guy with a mentally ill dog. It was difficult to be in the same room as the miserable mutt, because of the unyielding way he would snarl and foam at the mouth, maliciously gazing at me through the stainless steel bars of his kennel. Ultimately during these stare-downs one of us would always have to leave the room, and being that I was the one who was not in a cage, it was me that would retreat- keeping my eyes glued to the little monster, lest he somehow free himself from his confines and attempt to gobble my extremities. It was inevitable that eventually the dog and I would have our showdown. It happened one sunny summer morning as I innocently bent over to pick something up from the floor. My back was turned in foolish blind faith, when he silently sprinted towards me and bore his incisors deep into my skin- missing my nether regions by about an inch. My boyfriend's response to this crisis was to completely ignore the injuries I'd just sustained from the sneak-attack, and run to the dog. He coddled the nasty canine and stroked its mangy fur, while I stood and wailed, blood running down my leg. I iced my wound with a cold beer and cursed the fates for making me fall for a guy who loved his dog more than me. 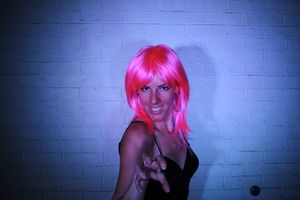 That night I went out alone with the intention of drinking away my sorrows and coming to terms with the idea that I would likely die a single old maid with a beat-up guitar and a half-dozen cats at my side. I was feeling jaded and pissed off and was in no mood to converse. It was that night, I met Danny Rampage.

Though neither of us did much to impress the other during that initial introduction, our paths ended up crossing a few more times and ultimately the two of us wound up heading out on a tour together. Now, of course, I thought this mysterious, dreadlocked misfit was some kind of handsome badass who would passionately and convincingly lead me to certain emotional disaster... but I also kind of liked him, try as I might to shake that feeling. I mean, he was charming, talented, & so sweet- and I was as skeptical as he was handsome. In the end, I decided to count my blessings and enjoy the wild ride. We spent the fall playing basement parties, coffee shops, & bars around the mid-west and soon, a little romance was blossoming. I had my acoustic guitar, he had his cajon, and we would basically set up anywhere they would let us, and play. During the downtime, we would try out different restaurants, while sharing our inner demons. We'd stay up late and drink until we'd either cry or pass out and then fall asleep in each other's arms. I had it in my head that being in a band with a potential suitor was a combination that would be doomed from its inception, but it turns out that not all my intuitions are accurate. Danny and I ended up getting married and have been playing music together in various iterations for the last 7 years. 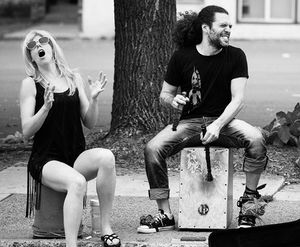 Tonight (Friday, April 3rd) we'll be returning to our humble roots. The two of us will be performing a live-streamed concert on YouTube with our old wooden instruments and a bottle of whiskey. It will be just like the good old days when we first met! Sometimes it takes a swift kick (or bite) in the ass to make you realize that you are settling for mediocrity when you could be treated like a queen. There are good things out there for all of us, we just need to be spurred on to take action and to recognize that we really do deserve happiness. Danny Rampage and I are going to try to help spread a bit of that sentiment tonight and we hope you'll join us. First one to drink 'til they cry gets a prize. ;-)