It was a frigid February evening, and Danny Rampage & I had been arguing. He left to grab some drinks with colleagues and I, feeling frustrated & irritated, decided to go to bed early. I did my usual bedtime routine of putting in earplugs, donning a light-blocking eye mask, setting my phone to "do not disturb" mode, and turning on a loud fan. This is the only way I have a prayer of sleeping at all. I was just entering a dream state when I sensed a vibration. Knowing it couldn't be my phone, I assumed it was one of my neighbors and annoyingly flipped over, trying once more to fall asleep. Again, a damn vibrating noise prevented me from my slumber! I looked over to the desk where my phone was sitting and it was illuminated, indicating I was receiving a call. Now highly irritated, I picked it up and saw it was my husband calling. I answered, likely not hiding my displeasure. He sounded incredibly panicked on the other line. My first thought was a car accident... My mind immediately went to bloody, mutilated limbs & irreparable disfigurement. Bracing myself for terrible news, I listened as Danny Rampage painfully described that he'd slipped on the icy sidewalk and feared he'd broken his ankle. I'd never heard him sound so terrified so I grabbed my glasses and pulled the car around to find him laid out on a sheet of ice a block from our door. As I approached him, the first words out of his mouth were, "How am I going to play the release party?"  It was a valid question because, despite my wanting him to come upstairs and sleep it off, Danny had a trimalleolar fracture in his right ankle. The one he plays his kick drum with. He couldn't really have broken it much worse than he did. He tends to go big or go home. 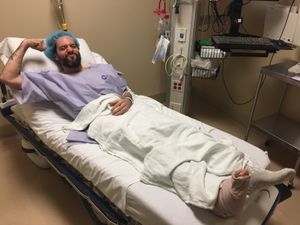 I was scheduled to fly to Florida the night after his surgery to visit my aunt. Terribly conflicted as to whether or not I should stay to care for my broken drummer boy or leave him in a painful heap on the couch, I agonized, but he insisted that I go. We said a tearful goodbye and though I felt incredibly selfish, I left him in the care of his parents. His dad had just had surgery too, so his poor mom was the attendant for both. While I basked in the sun in Tampa drinking Vino Verde and eating stone crab, Danny Rampage spent a week in a drug-induced state, torpid and helpless as he adjusted to his newly bolstered limb now full of screws, pins, and plates. 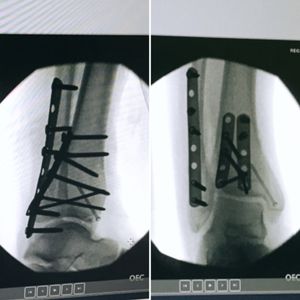 One of the many admirable qualities that Rampage has in his personal toolkit is that he doesn't really sit around and wallow in self-pity or expect anything to be handed to him without earning it fair and square. He was broken yes, but he sucked it up and he made the very most out of this horrible situation. When getting from place to place with a walker prevented him from being able to use his hands to do things like bring dirty dishes to the sink or do basic self cares, he attached a satchel to the walker and used it to carry things that he needed to the places where he needed them. He felt a small sense of liberation that he could now contribute more around the apartment. It didn't stop there. Next, he ordered an iWalk, which is basically a peg-leg. It attached to his knee and allowed him to walk hands-free again. He actually did a happy dance when he put it on. We didn't miss a gig. Danny Rampage learned every drum part with his left foot and I don't think our audiences even noticed any difference. Fans stepped up to help us load gear in and out of venues, and we felt more united than ever. 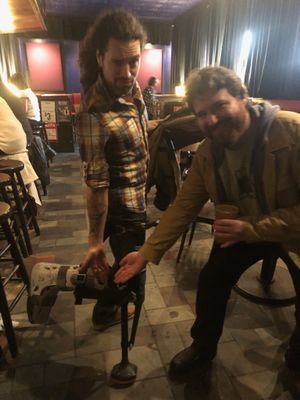 Now a year after the fall, Danny and I climb mountains. We hit the gym together. He just did two 10 hour days in the studio, laying down his drum tracks for our upcoming album. He didn't complain of fatigue or pain- rather, he smiled almost the whole time. It's that kind of tenacity that caught the attention of a local production company who recently did a series of short documentaries on the members of Hot Pink Hangover. For Danny's piece, he talked about the trials and tribulations the injury forced him to adapt to and how it actually made him a better drummer... take a peek here. When I think about someone who fights for what they want, my husband is the poster child. I've seen it in many realms of his life. I am so honored to go through life with such a driven, motivated, ambitious, and able-minded person. He makes me proud every day. I hope he's proud of himself. 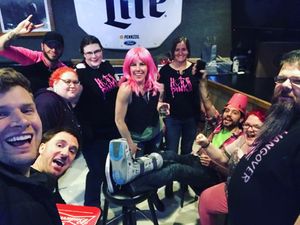